One of the largest and most imposing buildings in Selsey today is, without doubt, The Bill House so it seemed remiss not to investigate its history, particularly when one is allowed to copy this picture:

Here we see The Bill House and Its tower but, in the background, part of the roof and a single storey building are waiting to be completed and there is scaffolding still in place.  The twenty workmen are standing in a row with their hats firmly on their heads, wearing their waistcoats, aprons and overalls.

We can almost exactly date this photograph thanks to the fact that in the 1990’s The Bill House was listed by Historic England.  The architect was Mackay Hugh Baillie Scott, born in 1865, and he designed this house in an Arts and Crafts vernacular revival style, L-plan with service wing to the north and main wing to the south in 1907.

He also collaborated with Archibald Knox on the design of stained glass and fire-grates so he was an important man!

The roofs were constructed of ‘graded slate’ which was carted from the station to the house by Harry Prior with the biggest slates being placed just above the roof plate and the lightest higher up.

The stones in the courtyard were laid by Bill Lelliott, senior, who said they were taken from the beach.  It is unlikely this occurred when the house was built  as Bill Lelliott senior wasn’t born until 1910 but perhaps the courtyard was refurbished later,

Kelly’s Directory of 1909 shows that the owner of The Bill House was Byron Peters and he continued to own it until at least 1917.  He’s a very interesting man and will be the subject of a follow-up article.

The stones in the courtyard were laid by Bill Lelliott, senior, who said they were taken from the beach.  It is unlikely this occurred when the house was built  as Bill Lelliott senior wasn’t born until 1910 but perhaps the courtyard was refurbished later,

Kelly’s Directory of 1909 shows that the owner of The Bill House was Byron Peters and he continued to own it until at least 1917.  He’s a very interesting man and will be the subject of a follow-up article.

In 1918 the House was owned by Lieutenant Colonel C Smith, hotly followed in 1920 by Captain John A Hare and his wife Selina.  They had been long-time residents of Selsey and had lived in East Street since 1881.

By 1927 the House had changed hands yet again and its new owner, Mr C F Chapman, was offering one of his rooms to be used as a Chess Club.

John Gibson Jarvie, Barrister, was the owner in 1930.  He, at least, had a connection with Selsey as Ted (Edward Morton) Barford, son of Percy Crompe Barford MB, LRCP, one of Selsey’s much loved GPs, worked in the barrister’s office.  The Bill House was one of three properties owned by this gentleman.

He then sold the House to Sir Felix John Morgan Brunner, Bart.  Lady Elizabeth Brunner was the grand-daughter of Sir Henry Irving, the famous Victorian actor/manager.  Sir Felix continued to live at Bill House and referred to it as his ‘country seat’.

We know the Brunners still owned The Bill House in 1935 but from there on we have a gap until 33 July 1946 when The Chichester Observer reported the item on the left.

It is interesting that the word ‘Hostel’ is used because, upon investigation, it seems likely that The Bill House was requisitioned for evacuees for the duration of WWII.

And now we are entering the territory of living memory so I’m looking for help from here on in.  In 1950 Cecil Stone and his merry men, including a very young John Mariner, refurbished The Bill House. The main job was to install central heating.  John tells me that the pipes were too long to go up the internal stairs without being cut into small sections so they scouted round the house and found ventilation holes in a gable end.  They erected scaffolding, carried the pipes up and fed them through the holes. Once the major works were complete the house was painted inside and out.

In 1954 Roy Saunders owned the property.  Roy was a member of the Selsey Players who played the part of a doctor in a production of ‘Suspect’ in November 1955.  He was well qualified to do this as, in real life, he was a member of the medical profession.

Now we can take up the story of the House again because, in 1957, the League of Friends of Normansfield was formed by Lady Brain and Colonel Symmons and money was raised to provide, amongst other things, The Bill House at Selsey, Sussex as a holiday home.  Normansfield was founded  in May 1868 by Dr John Haydon Langdon-Down and his wife, Mary, as a private home for the mentally handicapped, especially for the children of the upper classes whom they sought to educate and train to the full extent of their capabilities. Normansfield was in Kingston Road, Teddington and John Langdon-Down is the physician who first identified and described Down Syndrome (in 1868) although the condition did not bear his name until the 1970’s.

The Friends of Normansfield & Richmond Foundation published a leaflet containing this photograph and have kindly allowed me to show it to you.

I am assured by the Manager, Carol Belcher, and a young lady named Zarina that these views look the same today.

In that same year, the West Sussex Gazette of 19 September 1957 contained an advertisement from Messrs. Wyatt & Son who made a Preliminary Announcement concerning The Bill House.

They had been instructed to Auction a great many lots of surplus antique and modern furniture on the premises on Tuesday, 1st October 1957.

The Bognor Regis Observer of 27 September 1957 contained the advertisement on the left.

This brings up an interesting anomaly.  I found a newspaper cutting which appears below.

Rarely does such an individual property become available with a wide foreshore frontage as the Bill House at Selsey which is just on the market and for which Fox and Sons are inviting offers in excess of £150,000.

Subject to planning consent, this imposing property offers excellent potential for continuation of use as a holiday home or as a hotel, club or rest home.

Standing in grounds of about one and a quarter acres there are superb sea views from many rooms and a foreshore frontage of about 245ft.

The spacious accommodation in the main residence includes six bedrooms (three of 20ft plus), two bathrooms and four reception rooms.

The lofty lounge has part-panelled walls, timber studding and beams and an inglenook fireplace.

Across the courtyard and archway is the annexe with two/three bedrooms, living room, kitchen and bathroom.

Leading off from the hallway is the three storey tower approached by a narrow spiral staircase and from the top floor are magnificent panoramic sea views.

There is also a detached bungalow in the grounds with two bedrooms, living room, kitchen and bathroom.  Outbuildings include a detached games room and the lawns extend on all sides of the main house with ample scope for parking.’

And finally, here are some more pictures of The Bill House.   The first two are from Historic England:

Here we can see the house with its gardens and tennis court.  Perhaps the bathing huts were for family members.  I’m intrigued by the fact that they seem to be divided into two groups and I wonder if this was Ladies and Gentlemen’s huts.

Who knows?  Perhaps someone does and will let me know.

The huts are gone but the tennis court remains.  You can see the extent of the coastal erosion over the preceding 20 odd years.  Some sea defences have been erected by the tennis court and groynes installed.  There are many more people on the beach and 8 cars are parked in the road.  Some trees seem to have disappeared while the gardens have a slightly unkempt look.

This article is the intellectual property of the author and may not be copied or used in any way without her written permission.

Despite my best efforts I have been unable to ascertain the source of the ‘On Selsey’s foreshore’ quote.  If I have infringed anyone’s copyright, I apologise and will issue an acknowledgement in the next Selsey Life.

Brian Male for the photo of The Bill House being built

John Prior (of blessed memory) for information about the roof slates

Jack & Anne Tupper for the photo of Harry Prior from the Mollie Tupper Archive.

Historic England for allowing me to use their listing and to reproduce the aerial pictures of The Bill House.

Ian Jones-Healey – Archivist & Curator | Langdon Down Museum of Learning Disability, www.langdowndown museum.org.uk for his help and advice and also for putting me in touch with… 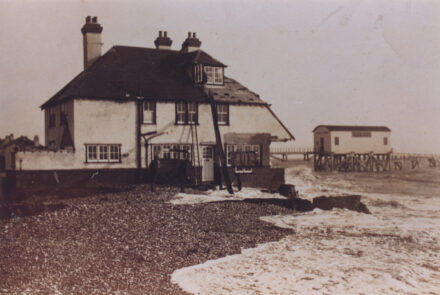