The Selsey Pavilion, also known as Selsey Hall, Selsey Hippodrome and Selsey Cinema was built in 1913 on the site of a thatched bakehouse. It was designed by the London architect Harold Arthur Woodington.

Located in the heart of the High Street, with its striking cement plaster art deco inspired facade, the Pavilion is a rare Edwardian era music hall, early cinema, theatre and a multifunctional community hall

The Pavilion became a year-round entertainment centre for residents and visitors alike.  In the 1930s Freddie Phipps, lessee, capitalised on films and shows by starting early and then removing all the chairs for a dance later.

By 1941, with the exception of festive pantomimes, the Pavilion had become a full-time cinema including Saturday Cinema shows for children.  After closure the building was let to a local aviation catering company until 2007. The building had fallen into disrepair and was saved by the present owner, whose intention was always to give it back to the community.

In recent years the Pavilion has hosted a few performances of plays and occasional exhibitions. A Blue Plaque was unveiled in 2017. A local charity, The Selsey Pavilion Trust, was formed in 2017 with the aim of restoring the Pavilion as a multifunctional community centre. 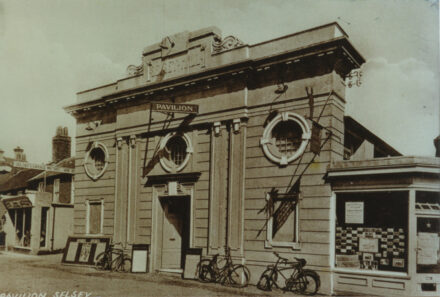 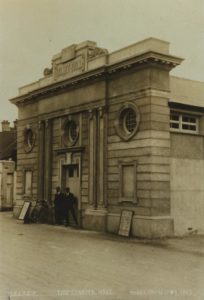